Alberta: From the Lowest Valley to the Highest Peak

In a matter of a few hours’ drive in Alberta, you can travel through time.

If I walk 100 meters from my front door, I can get a clear view of the Rocky Mountains in the distance. They are formidable even from an hour away, and although some of the ranges are less than 100 million years old, they are considered younglings in a geologic sense. It sounds ancient to our ears, but on that grander timescale, it is only a few blinks of the eye.

But for our first day of exploring Alberta, we chose to head northeast to the Canadian Badlands where we found ourselves in the land where the dinosaurs roamed; an absolutely epic place of remarkable rock formations and fossil beds called the Drumheller Valley. Entering this valley was like landing on the surface of another planet. The shortgrass farmland and canola fields suddenly vanish and an alien rock wall begins to rise at either side of the vehicle as you descend further and further into this truly spectacular, almost secret, world. 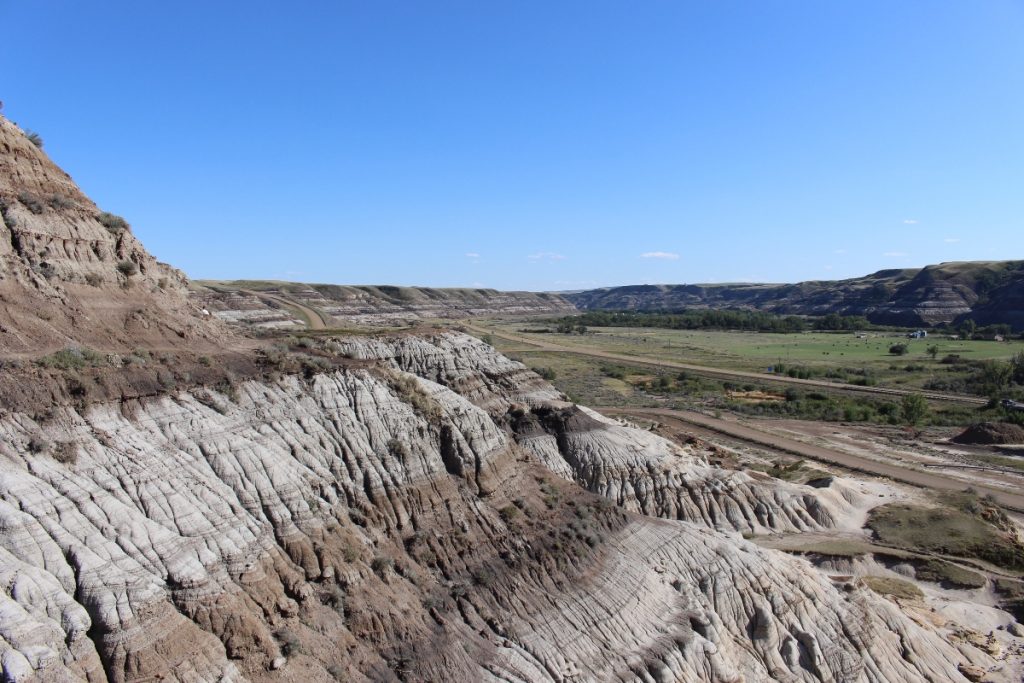 Drumheller is a truly Western town, and the dinosaur fever is alive and well on every street corner. A few rickety coal mines from the town’s past dot the landscape, but with the decline in coal production they seem to have embraced their prehistoric past with open arms. Alberta is now known to be home to the largest deposit of dinosaur bones in the world, with a world-renowned museum and research center at the heart of it all. Dino statues are just about everywhere here, ranging from little ones that patiently wait with you at the bus stop to the World’s Largest Dinosaur roadside attraction (with 106 stairs you can take right to the top!) The local coffee shop even has a delicious “Albertosaurus” blend, named after the tyrannosaurid found here the same year Alberta became a province.

Just north of town we stopped at a legendary lookout called Horsethief Canyon, named for the outlaws who hid their stolen livestock here more than 100 years ago. I struggle to find the right words to describe the truly ethereal beauty of this valley with any justice. It felt so special. Standing on the edge of this ancient seabed, once home to towering fauns and huge, prehistoric insects, I was in complete awe of the wonder of time and space, and of our incredible planet. Having spent the afternoon hiking down into the valley and filling our pockets with fossilized wood, bone, and crystals from the dry riverbed below, we left Drumheller knowing it would likely be our favourite place in all of Alberta. 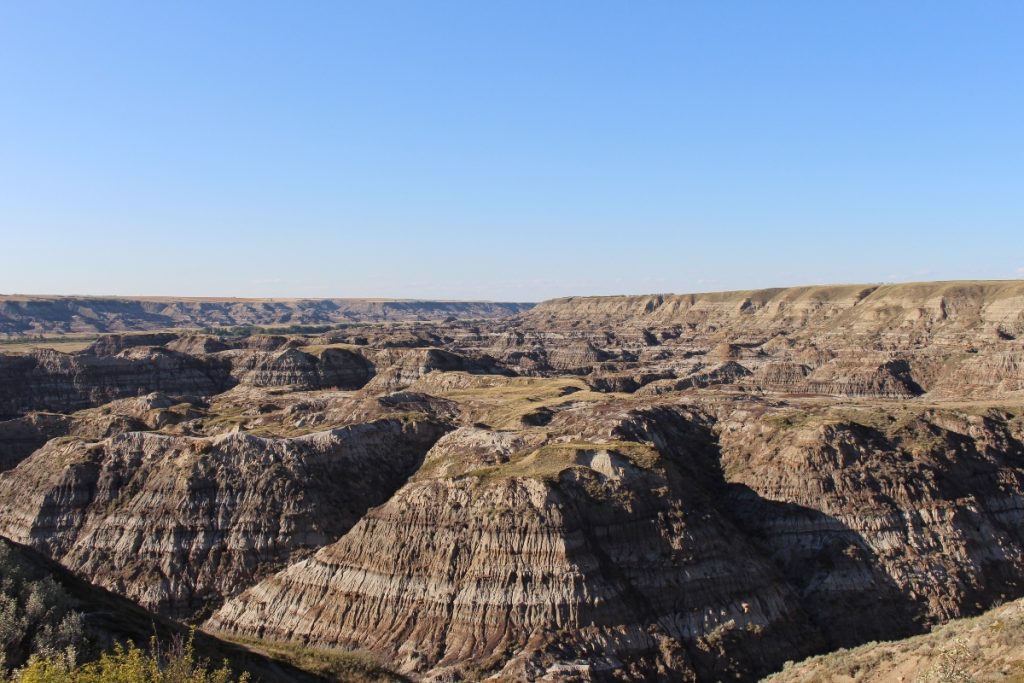 Our next stop was Lethbridge, a sunny and windy city in the southeast. Despite having only just over 100,000 residents, it is Alberta’s fourth-largest city (bit of a cute statistic when you come from out east, isn’t it?) It was similar in landscape to Drumheller, with its sunburnt soil and prickly cactuses, and it had the same familiar hillsides with nothing but bright, baby blue sky above. We drove out here for one reason, and it was to behold the Lethbridge Viaduct, or the High Level Bridge, an incredible feat of engineering built to traverse coal across the Oldman River Valley when coal mining was at its height. This bridge is the longest and the highest of its kind in the world, and it is absolutely awesome. Southern Alberta is known for its extreme temperature changes and severe wind gusts, which makes the construction and the existence of this bridge even more fascinating. 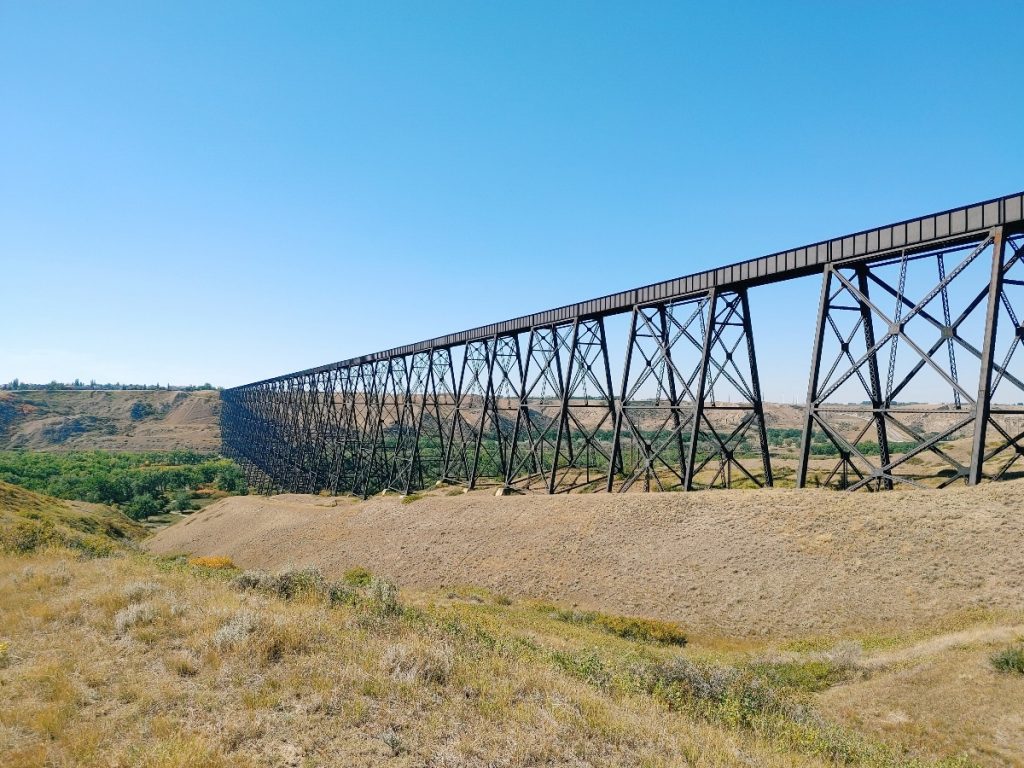 Without many trees for shade, the dry heat scorches your skin quickly. We decided to follow the lead of the nearby locals by taking a dip in the river in the shadow of this steel leviathan, only to be graced with the presence of a few deer on our way back to the car. It was a good day indeed.

We have since explored the Rockies many times; sometimes for longer hikes on the weekends with a can of bear spray, and other times we have made the drive just to see the stars on a Tuesday night. The mountains are moody, ever-changing, magnificent, and very much alive – while rain and cloud whip through its forested valleys, it could simultaneously be a sunny and pleasant day in Calgary. And if one has a head full of adventure, the Rockies are just the place for their spirit to find it. Banff and Canmore have become much busier and more urban than the quiet mountain towns they once were, but there is still plenty of tranquility to be found off the beaten path.

We are lucky to have such incredible beauty in our backyard here, and I urge all Canadians to create opportunities for themselves to explore our great country sometime in their lives.

I will leave it at that for today, but will return once more for a #WorkFromHome instalment…