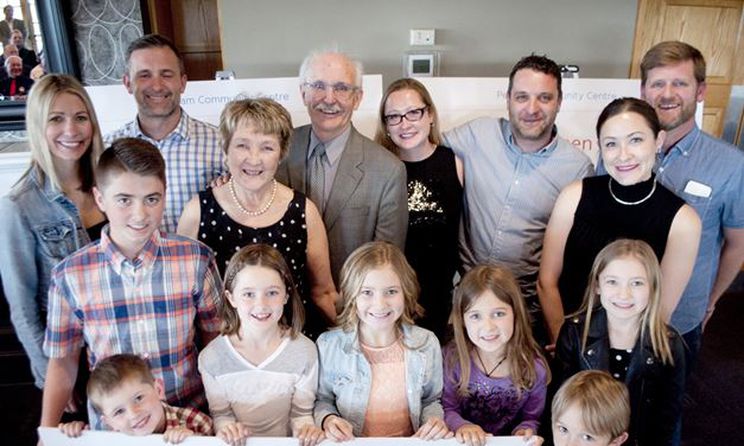 Community centre campaign off to a $1-million start ​

PELHAM — Gary Accursi can remember back in the 1970s when proponents for a new arena in town came knocking on his door.

While he’s now a town councillor, at the time the dentist was still fairly new to town. He moved to Pelham 44 years ago. He decided to chip in to that fundraising campaign. As he recalls it was about $10 he contributed to the Pelham Arena that now sits on Haist Street.

This time around though, he is upping the ante as the town forges ahead on a $3-million campaign for the currently under construction Pelham Community Centre.

“All five of our kids have been involved in hockey, lacrosse, soccer at the arena,” said Accursi, who has contribute $300,000 toward the new $36.2-million twin-pad facility.

He and his family were amongst several group and organizations honoured last week for such contributions to the ongoing campaign, with an event announcing naming rights at Peninsula Lakes Golf Course last week.

The event served as a chance to mark a significant milestone in the campaign with donations having passed $1 million. In December of 2016 that number sat at $400,000 thanks to contributions from Trillium Mutual Insurance, Duliban Insurance, and Accipiter Radar Technologies Inc.

“Town council and I greatly appreciate the generosity,” said Mayor Dave Augustyn, adding that progress in fundraising is a testament to the support of the project in the community.

Fundraising consultant Martin van Zon said the current progress is impressive given fundraising didn’t start until last April. He noted a similar campaign of $3 million for St. Catharines Performing Arts Centre took a total of three years. Given Pelham’s comparative size he said the campaign is off to a good start.

“Pelham has done phenomenal,” he said, adding, “I think we’re ahead of schedule.”

He pointed out the campaign is still in the naming-rights phase, and will eventually move to soliciting community donations.

Originally posted in the Niagara This Week – Written By Steve Henschel, May 17, 2017