“Money isn’t everything to Millennials” 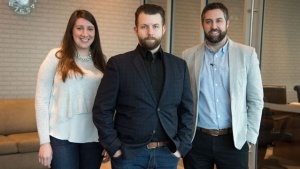 Three Burlington millennials are breaking preconceptions about their demographic cohort when it comes to what they look for in a dream job.

The Burlington Post sat down with a sampling of the generation born between 1983-97 to talk about their work experiences and to get their take on the current marketplace and how they see it evolving.

A 2016 survey was done by Deloitte to find out what millennials really want from a job, and discovered pay and work perks, like benefits, were top of mind.

But that wasn’t the case for 33-year-old senior landscape architect Brad Smith, who took a pay decrease to land his latest job in Burlington.

“I came out of school in 2010 and, I think at that point, organizations were just coming out of the 2008 recession. They were just starting to look at recruiting so, unfortunately, I missed the boat a little bit.” – Kayla van Zon

“When I switched jobs in 2012, I didn’t chase salary at all…. I did it more for an opportunity,” said Smith, who previously worked as a landscape architect for a company in Kitchener.

“I find in my job, I look for work that challenges me… how can I be the best landscape architect and then work to be a little bit better… we definitely look for projects and opportunities that push us architects to grow.”

Agreeing with the married father of one were Kayla van Zon, a 28-year-old marketing account director, and 26-year-old Christopher Reuse, who was recently let go from his job as a project co-ordinator for a Scarborough construction firm.

“I obviously think salary is important, but I don’t think it can be No. 1. If all you’re out for is (a high) salary, you’re never going to be happy.”

For Reuse, salary and benefits, such as vacation, certainly play a component in a job search, but he noted, most of all, he’d like to see the willingness of an employer to change with their employee.

“The ability to work a couple of hours extra, but then, if you need to time to let’s say come to the Burlington Post and do an interview, to allow that,” he said. “Rather than saying, no, you have to be here from 9-5 and it’s not negotiable.”

Van Zon noted there’s a stigma around millennials in that they all feel they’re entitled to something without having to put the work in.

“I think college and university plays into that a bit…. they (would say), ‘you’re the shining stars of the future; you can do whatever you want. You can work wherever you want. Don’t let anyone tell you you’re not the best because you are.’ And then there’s the harsh reality of when you enter the workforce,” she said.

Smith admitted when he first entered the marketplace approximately a decade ago, he expected his salary to be higher and “not that I didn’t have to work hard, but as hard as I had to, to get to where I’m at now. The reality is, you start very junior, keep your head down and work your butt off.”

Van Zon graduated from urban planning and environmental studies from university and couldn’t find a job in her field — companies would tell her they weren’t interested in hiring juniors at the time.

“I came out of school in 2010 and, I think at that point, organizations were just coming out of the 2008 recession,” she said. “They were just starting to look at recruiting, so unfortunately, I missed the boat a little bit.”

After interviewing with 20 firms over a four-month period, she ended up with a job at her father’s company, where she said she still had to interview and prove she was right for the position.

“I just didn’t want to be the person who got a job at her dad’s firm, so I was resisting that for a while,” she said.

Van Zon also noted, in retrospect, she should have listened to advice to intern at companies she hoped to work at while still in university, rather than taking the “fun” jobs that paid her so she could “enjoy her summer.”

Reuse was lucky enough to find a job in his field, but realized companies weren’t always willing to spend the time to provide on-the-job training.

“They expect to drop you in and go,” he said. “Whereas I was expecting a walkthrough for a week or two, just so I could get the hang of things.”

Smith, upon graduating from university, found himself putting in extra time to learn skills and programs just to keep up with the day-to-day work at his office.

None of the trio said they worked a typical 9-5 job, averaging between 40-60 hours, depending on the week.
According to the Deloitte survey, millennials want a sense of meaning from their work.

As a landscape architect, Smith said he’s constantly immersed in the world of design, so much so, he doesn’t think of it as work.

“I feel like I’m always working, but not in a bad way,” he explained.

“Brad and I are similar in that we both work for entrepreneurs… it’s almost like you’re carrying on a bit of a legacy… I think we’re unique, though, in that,” she explained.

When asked if he found current employers were changing their expectations to what millennials are looking for in a job, Reuse said he found it to be the opposite.

“I find that it’s the millennials that are changing more to what the employers are looking for, just from my experience on the job hunt,” he noted. “You get a bunch of jobs and read the criteria and then you try to match your resume to what they are looking for based on your own experiences in hopes they will align to their algorithms and somehow make it to the HR person there…. It’s kind of a cat and mouse game.”

Van Zon and Smith said they’ve encountered the other scenario.

“I think our office, it seems since I’ve been there, has always had a flexibility for work (hours),” said Smith. “What we started to do is invest in space. We just renovated our studio to make it more open concept, no doors on offices, make it brighter to try and improve culture a little bit.”

Van Zon said her employer has adjusted to meet the needs of its now younger office, becoming more open to working from home and off-site.

“It depends on the organization and how flexible they can be. But you have to start becoming flexible and changing attitudes to take in this new generation of people,” she said.

When it comes to social media, Smith and van Zon agreed in that it’s viewed as a source of value among potential employers, depending on what sector you’re in.

While Reuse said he saw it, for the most part, as more of a liability in that it could negatively impact your chances of getting the job.

Van Zon admitted, the first thing she did when she began looking for a job was redo her Facebook profile and make it more appealing to potential employers.

“LinkedIn has also provided us a formal avenue of social media that you can develop and curate the content to what you want yourself to be like, but your personal channels really highlight who you are,” as a person to your potential boss, she said.

“If someone can contribute to that, help us tweet, help us Instagram, then we look at that as a bonus,” Smith said of his current company. “It’s not the No. 1 factor of employment… but there is value in that skill set.”

As for advice for current millennial job hunters out there, the Burlington trio agreed they should tailor their resume to what an employer is looking for, try to network and communicate with companies they hope to work for, and apply, apply, apply.