The World of Colour Part I: Through the Eyes of Science

Colour is everywhere in our world. Could you imagine a world without colour? It would end up a lot like a scene from Lois Lowry’s The Giver, I imagine. We all know how well that turned out. This four-part blog post series will pay homage to the wonderful world of colour. You will learn where colour comes from, why we see it and how we can use it. It’s complicated and sometimes confusing, but always cool and always an essential element for creating a certain look or feel within marketing campaigns, advertisements, and more.

The Rainbow of Light

Light is made up of waves. These waves function at different frequencies and each frequency corresponds to a specific colour. The human eye can detect light waves within the frequencies of 390­–700nm (nanometers). This is called the “visible spectrum”. Any colour that you can think of falls within this range. White light is a combination of all of the waves that the human eye can detect.

More About That Eye 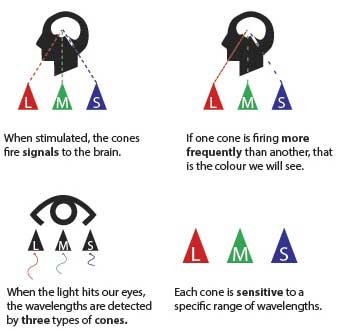 The human eye has three types of “colour detectors”. These detectors are called cones. The Long Cone (L) is most sensitive to long waves like reds and oranges. The Medium Cone (M) takes in the mid-length waves, primarily greens. The Short Cone (S) has the smallest range, focusing on the blue and violet waves. 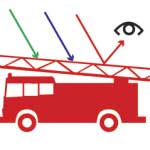 When white light hits an object, some waves are absorbed. The waves that are not absorbed are reflected back. Our eyes detect these waves and the colours that they correspond to are the colours that we see. The Interkom fire engine red (for all of those burning marketing matters) absorbs short (blue) and medium (green) wavelengths. The long (red) wavelengths bounce back to our eyes, our L cones start firing and our brain tells us we see red.

So Why’s the Sky Blue?

Ah, the question of the ages. When white light from the sun streams through the atmosphere it is scattered by the atmosphere’s particles. Blue is scattered the most because it has the shortest wavelength, making it easier to travel fast and scatter more. With all the blue light being reflected, it overpowers all of the other colours and makes the sky look blue. As the sky approaches the horizon line, it becomes a lighter blue, sometimes even white. As the light travels, it continues to scatter. By the time it reaches the horizon, it is so scattered that the colours have become jumbled together agai

Next: Time to Mix It Up
Join us for the next post in The World of Colour series, when we shake things up and explore colour mixing.n and we perceive white.