The World of Colour Part II: Time to Mix It Up

Welcome back for the second installment in our blog series on colour! We hope you learn something new and something interesting about the powerful communicative tool that is colour through following this series. We would love to hear your thoughts on what we’ve shared so far so reach out and connect with us on Twitter. Okay, let’s jump right in!

What are the primary colours? Red, blue and yellow of course…right? Wrong. That’s right, your teachers have been lying to you since elementary school. The truth is that there is no one set of primary colours. As you will soon see, there are different “primary” colours depending on what you are doing with them.

There are two ways to mix colours. The first is by adding light, which is called additive mixing. Additive mixing uses the primary colours of red, green and blue. The fact that these are the same colours the cones in our eyes are most sensitive to – as we learned in Part 1 of this blog series – is no coincidence. In fact, additive mixing is sometimes called optical mixing because additive mixing takes place inside our eyes. 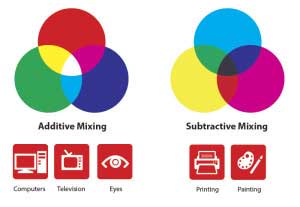 As already mentioned, every time light hits our eyes, we are using additive mixing to determine which colours we see. Other examples that make use of our eyes’ additive mixing abilities include: computer screens, television screens and any other technological screen you can think of. The images we see on screens are really just tiny little pixels of red, blue and green light. When we look at the pixels, our brain mixes them together to allow us to perceive the correct colours.

Where’s this magenta colour coming from? If you remember our spectrum diagram from the previous post, you will at no point see magenta on that colourful continuum. What frequency does magenta operate at then? The answer: it doesn’t have a frequency because magenta does not exist in the visible spectrum. So where does magenta come from? It is, in fact, a figment of our minds. When our L (red) and S (blue) cones are firing more than our M (green) cones, we perceive magenta. So magenta is kind of like a ghost, haunting us everyday: we see it, but it’s not actually there. Freaky.

Next: Taking a Spin on the Colour WheelJoin us for the next post in The World of Colour series and learn how to find perfect colour harmony.