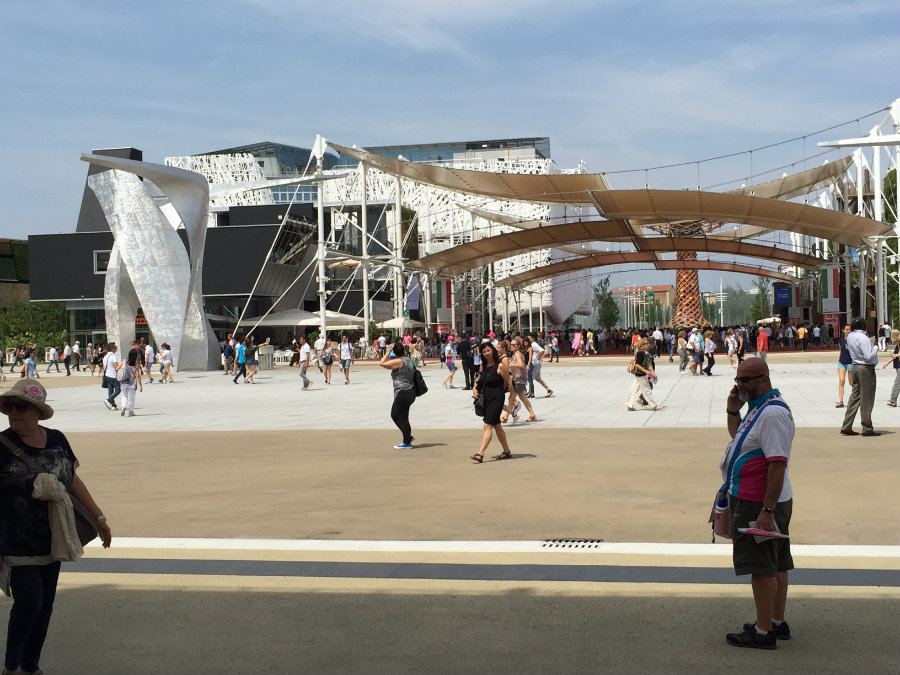 Earlier this summer I was lucky enough to visit the World Expo that is held every two years. This year it is on from May 1 to Oct 31 in Milan, Italy.

The theme this year is: Feeding the planet and Energy for life, both pretty big puzzles if you ask me, since the global population is increasing quickly every year and since the developing world will be needing both food and fuel in increased amounts.

I had never personally paid a lot of attention to these mass exhibitions, since I still have some terrible memories of a Disney park at Easter in Florida many moons ago.

The line-ups were crazy and it was hot, hot, hot! Even though it was only April in Florida. So the prospect of attending one of these giant exhibits was somewhat reckless I must admit, but really, we did not know what to expect.

To mitigate this, we decided to go on a Monday, since the weekends were the busiest as we surmised, as local Milanese were most likely to attend then. Well, we could have been right, but to be honest, when we arrived at the entrance of the exhibit area, the number of people on the subway, speeding to the end of the M line should have been a good indicator. It was busy alright, to say the least.

152 countries, organizations and companies are exhibiting in Milan and one of the first impressions was that the architecture of the individual pavilions was amazing, particularly if you are into design. Also the main corridor and walking area, which connects all the pavilions, was designed in a way that visitors were sheltered from the elements, in our case the blazing sun, which together with the humidity made temperatures soar to well over 35 degrees Celsius.

Besides the stepped up security to get into the ‘park’ (all backpacks, purses, camera bags, etc were scanned and asked to be opened), the areas was very well defined and it quickly dawned on us that the best pavilions, had the longest line-ups.

So some of the countries we really wanted to visit, became a no-go zone, due to the long waits. But the countries that we did see like China, Israel, France, Spain, Italy, Switzerland, Turkey, Kuwait, Slovenia, Slovakia, Indonesia, Belgium and Korea did not disappoint.

In particular, China, Spain, Belgium and Korea were impressive in my mind. Israel did a great sales job, and the Italian expo area, was vast, but the most impressive was a supermarket of the future which was put on by a Italian grocery chain called COOP, which was super impressive.

Bottom-line: this particular exhibition did live up to its reputation. Architecture, multimedia presentations, the sights and sounds of tens of thousands of people taking in all the novel ideas and concepts that all these countries offered up on how they will solve these very big questions that the world needs to address in the near future, was truly inspiring and left us with a lot of hope and provided great brain stimulation.

Mind you the Chinese food, the classic Belgian French fries and the lovely Italian yogurt and gelato, all helped with the experience. The free drinking water fountains were a godsend, the washrooms plentiful and pretty clean and the food was reasonably priced, particularly when you shopped at the supermarket of the future.

So for anyone, who’s looking for an excuse to visit Italy this summer of fall, or happens to go there before the end of October, take a day or two and visit the Expo Milano 2015. You will not be disappointed.